We’re now making it easier for you to filter posts according to recipient, select who should be listed as the sender, and compose posts together with a colleague.

We’re making it easier to filter and find recipients. Using the new search box, you can filter among your Haldor groups and select the groups or individuals to receive the post.

Another new function is the option to choose the sender of your post. When creating a new post, you can choose whether to be the sender or use the free field to enter a different sender, such as a preschool department, a team or staff group.

New roles for head teachers and heads of school boards

We are adding two new roles to Haldor with the rights to publish posts. These roles have the following rights:

Would your school like to allocate the new roles to manage posts? Ask the Haldor school administrator at your school for help.

Send bulk mails to one or more schools

Another new feature we will be releasing a bit later (Oct 1st) is the option of sending mails to one or more schools in, for example, a municipality. People with the new Business manager role can send such mails to students, guardians and staff and quickly pass on news affecting everyone, e.g. information on school transport for the new school year.

Save posts as draft

It will now be possible to save posts as draft prior to publishing them. If you are a group owner in Haldor, you can see all the drafts created for that particular group. You can edit both your drafts and drafts created by other owners in the group. Using this, several of you can contribute to a note before you publish it.

Save preschool documentation as draft

As the posting function is used for preschool documentation, the option of saving documentation as draft is also being introduced. All owners of a group in Haldor can see and edit the drafts created in the group. This means that you or a colleague can continue completing the documentation with text or images at a later stage. When you feel it is ready, you can publish the documentation.

See how many have read a post as a percentage 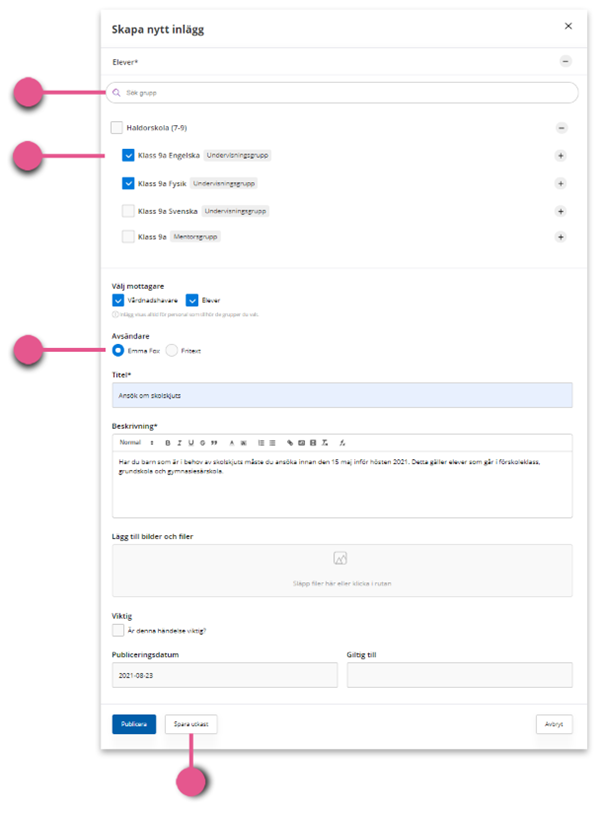 Do you want to learn more about Haldor Education? Read more about or our add-ins or request a demo .